In addition to the arcade mode (mobile game), I will be going through the process to add a platformer mode B to the game. I don’t want to, but my pride won’t allow me to just have a mobile game on Steam. In for a penny, in for a pound as the old saying goes.

I already have a basic platformer in the game, but I’ll be adding the following mechanics:

PIGS IDEAS
– Start with 1 balloon, you can get up to 3.
– Each balloon can keep you floating longer.
– Enemies can pop balloons.
– Each balloon means an air jump.
– Rather than punching blocks, you must stomp them.
– Stomping is different than jumping on things.
– Some enemies can be jumped on, others need to be stomped.
– To stomp, you must jump, and hold down and jump or specific stomp button.
– A stomp will always quickly fall to the ground, unless you have a remaining air jump, then you can jump to cancel the stomp.
– Some blocks will require 1 balloon to stomp, others 3 balloons to stomp.
– Jump on enemy balloon and hold the jump button to make a super jump.
– Jump up and press up in the air to hover for X seconds.
– Stomp when hovering to stop hovering. A second stomp would be required to do a stomp.
– To destroy walls, there will be dynamite plungers. Stomp them and a wall will explode or crumble.
– To pick up an object, stand on it and push stomp. Then you can jump, hover and push stomp to drop it.
– Objects can include anvils, bombs, guns, keys.
– A special balloon power up will force the pig to float up with control to slow down or speed up.
– A special balloon power up will allow for unlimited air jumps.
– A special balloon power up will let the player get full movement like a side scrolling shmup for level diversity.CONTROLS
– Jump (air jump)
– Stomp / drop
– Hover
– Run
Lucky for me I just so happened to have a platformer and demo level lying around. 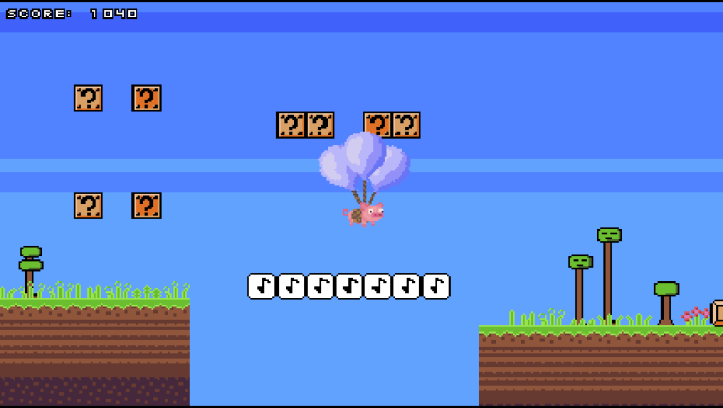 DONE:
– Air jump by number of balloons
– Hold the jump to float down to the ground
– Stomp
– Stomp halts in air for a split second before driving you down
– Stomp breaks things underneath you
– Physics from the arcade game
– The more balloons you have the slower you fall
TO DO:
– Player balloons must pop with damage
– Sync up balloons with characters
– Balloon power ups